Humans are usually called social animal and every society has its own norms and traditions. Some of these traditions are usually normal and others are completely bizarre. You may think that with the advancement of technology these bizarre traditions became obsolete but that’s not true. There are many regions in the world that follow these some traditions on a regular basis as an essential part of their lifestyle. 3 such bizarre traditions and rituals are mentioned below. 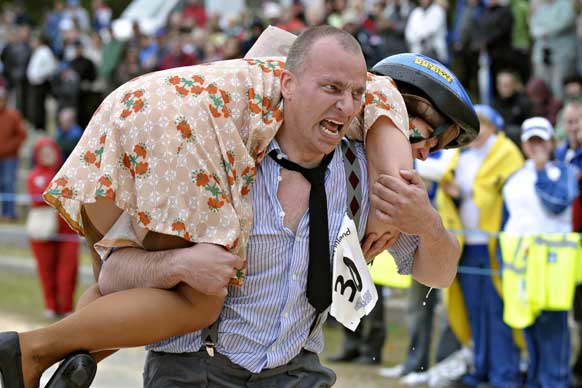 Husbands are mostly complaining that their life is so tough because it feels like they are carrying their wife all through their life. However, there is a tradition in Finland where the husbands really have to carry their wives. This tradition originated from the ancient Vikings time. It is celebrated to remember the kidnapping of women by Vikings men who later married them. People also believe that these games are played every year in 1800’s.

Nowadays, this tradition has become a more fun activity. However, the contestants take it very seriously. They invented new styles of carrying their wives and run the course track. There are official judges present to supervise the contest and give a final verdict. This tradition is spreading to other parts of the world as well. Now, people in several countries including US also arrange a contest like this every year and have fun.

#2. Swim for Cross in Danube River: 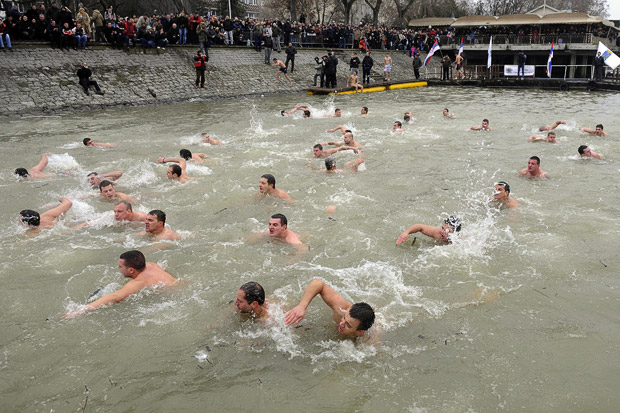 It is one of the most bizarre tradition but still people follow it blindly. Every time, at the peak of winter in January, when the water in Danube River was already half-frozen, this bizarre tradition happens. Not only the selection of time is weird but also the tradition itself is strange. An Orthodox priest throws a cross in the river of Danube and the teenage boys jump into the icy water to bring the cross back.

All of this happens in front of a crowd of hundreds of people who are cheering the boys. During this time, the priest throws holy water on the crows to bless them. The teenage boy who succeeds in fetching the cross will be considered as blessed for a whole year. In that cold weather, the best blessing should be to not jump in the water because there is a lot of chance of getting hypothermia and pneumonia. The strange thing is that this tradition is supported by the Orthodox Church itself. This tradition is endangering the lives of innocent teenagers. Still the followers perform this bizarre tradition every year.

The origin of this tradition comes from the celebration of the baptizing of Jesus in the River of Jordan. However, the Genius Romanians are not able to differentiate the weather conditions of the River Jordan and Danube.

#3. Jumping Through the Bonfire of St. Joan: 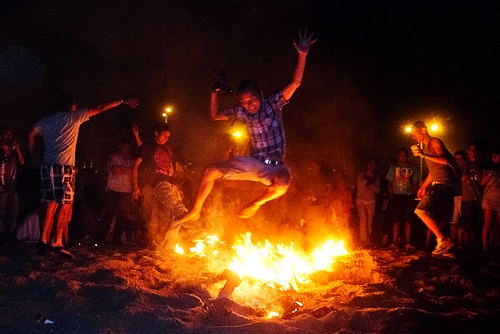 If you are still astonished with the tradition of finding cross in Danube River then get ready to know about another weird tradition. This tradition or celebration is carried out in Spain on St. Joan’s day where people build a giant bonfire and jump through it for the good luck. Wow! What an interesting way to earn next year’s good luck! This bizarre activity originated in 1928 from the city of Alicante.

In most of the Europe, the St. Joan’s day is celebrated by burning the old furniture and building a fire. The residents of Alicante decided to take this tradition to another level. First, they combine all their old dressers, grand pa’s chair and all those furniture followed by building a giant bonfire by burning this stuff in an open ground. Still, people think that it is all good but it doesn’t stop there. The teenagers and children start jumping through this bonfire to cleanse their bodies and soul from evil. Their parents watch them from the sidelines, cheering them.

We showed you three strange traditions that people follow religiously. However, our world is full of many other weird traditions similar to these.